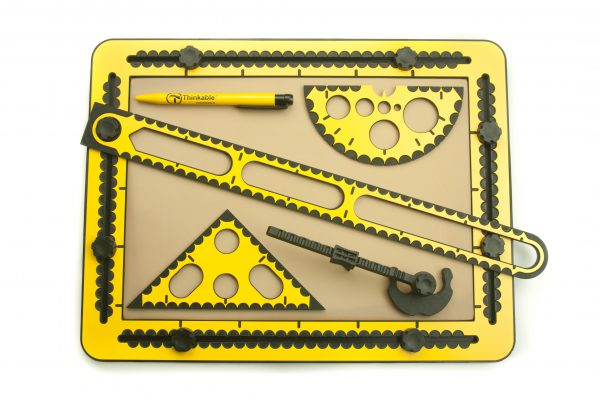 The TactiPad is a versatile drawing board which enables a VIP (Visually Impaired Person) to make a tactile drawing themselves or on which someone can make a drawing for the VIP. These drawings are made on a thin sheet of plastic foil on top of a layer of rubber. By firmly pressing down on the foil the lines will raise instantly, forming the tactile image. The ergonomic design makes drawing easier and much more enjoyable.

The TactiPad has many applications: it is the ideal drawing board for leisure activities, schoolwork or in your professional career. It can even be used on the go or while travelling.
You can choose whether you want to make a simple sketch by hand, or use the different drawing tools – ruler, triangle, protractor and compasses – for highly accurate drawings. Eight adjustable buttons and measurement indicators around the drawing surface allow you to accurately fix the tools while drawing.

A selection of the possibilities

– Means of communication between VIPs and sighted people.
– Everyday drawings for fun and games.
– Keeping track of the scores in a game.
– Mounted on the wall as a memo board .
– Doing your homework (e.g. maths or geography).
– Making greeting cards or other creative expressions.
– Creating pie charts and other diagrams.
– Using or creating a map of your surroundings by carrying it with the shoulder strap.

By combining the TactiPad with the TactileView drawing and production software and digital pen, the drawings that you create can be saved on the computer as well. This method of drawing enables VIPs to create digital images in TactileView.
Moreover, this setup can also be used to explore audio-tactile diagrams. The TactiPad will function as a touch screen with the digital pen as a pointer, allowing you to access the spoken digital information in a drawing.

The functionality for the digital pen is incorporated in the TactileView drawing and production software. The software records the drawing with a receiver that is attached magnetically to  the sides of the TactiPad. The software can be operated entirely using the digital pen. For this, the pen functionality cycles between drawing, exploring an image or operating the menus in the software.

Besides the regular drawing tools, two additional accessories and their accompanying drawing tools have been developed to extend the drawing possibilities on the TactiPad even more.
The GraphGrid is the tactile equivalent of grid paper and uses rubber bands to add a grid to the drawing surface. This can be used, for example, to create tables, for drawings with repetitive patterns or for graphs and other mathematical drawings.
The CircleFrame can be used for great accuracy in circular drawings. Using the drawing tools, you can easily create images such as pie charts, the face of a clock or interesting circular patterns and motifs.

Clever accessories to increase the potential of the TactiPad drawing board.

Young children can playfully learn to make beautiful and instructive drawings and students can do their homework faster and with greater accuracy. Artists of all ages get new tools to express their creativity on the TactiPad.
The GraphGrid and CircleFrame intuitively extend the possibilities to play and learn. On one hand, mathematical principles emerge when drawing abstract, regular shapes. On the other hand, practicing these principles leads to surprising tactile results. This way, learning while playing will seamlessly move into playing while learning.

New approaches to build up a drawing

The basic way to draw on the TactiPad is to make use of the entire surface and the measurements along the four sides. The ruler, triangle, protractor and compasses are all that is needed to make a freehand drawing.
The CircleFrame and GraphGrid both offer a different approach to construct a drawing. The many reference points and indications for distance and rotation that these accessories have, give way to a vast range of new creative and technical drawing options.
The CircleFrame exists of a frame the size of the TactiPad with a large circle cut out of the middle. The three drawing tools can be used along the perimeter and inside of the circle. This way, the drawing is shaped around the center of this circle.
The GraphGrid is a rectangular, TactiPad sized framework with mounting points on both the inside and outside edges of the frame for rubber bands. These create a flexible grid which enables you to use a regular pattern of rows, columns and cells.

The large triangle with smaller and larger waves and zigzag lines fits perfectly in the CircleFrame and can freely rotate in the circle. Rotating the triangle by small increments and tracing the shapes around the edges creates a wonderful overlapping tactile pattern.
The second triangle is constructed in such a way that, when placed with its corners in the indents around the circle, it exactly spans a rotation of 45, 60 or 90 degrees. By making your own templates out of cardboard and cutting a shape from the middle, the variation is endless.
The indications around the edge of the circle enable you to measure angles per five degrees. Just outside of the circle, larger angles are marked with extra indications: straight grooves show angles of 45 degrees, whilst drop-shaped indents are repeated every 30 degrees and thus show the hours on a clock. The minutes are formed by grooves in the wedge-shaped drawing tool, so you can draw a clock with ‘real’ our and minute hands. This wedge-shaped tool can also be used to precisely draw a pie chart to present statistic information. The compasses can be combined with the CircleFrame in surprising ways as well.

The flexible grid of rubber bands makes the measurements around the sides of the TactiPad tangible throughout the entire drawing surface. This way, you can make use of a regular, ordered grid in your drawings. You can play many games using the cells, like tic-tac-toe and battleship, or keep your own scores in games like Yatzee.
The GraphGrid can also be used as a table to present all sorts of data. In elementary school, children can learn concepts like bigger/smaller and more/less, learn to count or memorize their multiplication tables.
There are numerous applications for the GraphGrid in math as well, for example to construct a graph by using the grid as coordinates. Higher placed rubber bands can easily be identified as the x- and y-axis. The trigonometry drawing tool can be used to accurately draw a sine, cosine or tangent wave with the same scale as the measurements of the GraphGrid. 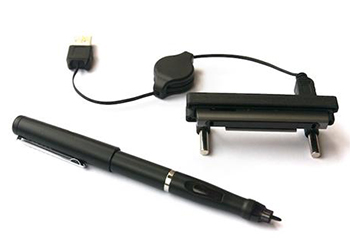 The TactileView digital pen is a special version of a ballpoint. The pen writes in ink like a normal pen, but meanwhile determines the position of its tip on the drawing surface.
In the pen’s tip is a small transmitter, which sends a signal to a receiver. Upon moving or clicking in the drawing surface with the pen, the receiver transmits this position to the TactileView software, just like a regular computer mouse would. Visual impaired people can operate the TactileView software with the digital pen using the TactiPad or TactileView ClickPad.
The pen functions as a drawing tool and transmits to the computer what has been drawn, or as a cursor by transmitting on which location has been clicked. This way, the digital pen enables the user to make a digital version of a tactile diagram or to explore a tactile diagram with speech and sound.

TactiPad drawing board – Drawing digitally and by hand

In combination with the TactileView digital pen and the TactileView drawing and production software, the TactiPad becomes a digital drawing tablet for tactile diagrams.
Upon drawing with the digital pen on the TactiPad the diagram will appear as a raised line drawing on the plastic drawing sheet, just like using a ballpoint. Combined with the drawing tools (ruler, set square and protractor), or just drawn freehand with the digital pen, a tactile diagram immediately arises on the TactiPad.
Since the pen also functions as a mouse, the software will record a digital version of the diagram while drawing. This hand-drawn sketch on the TactiPad can be refined with the drawing functions of the TactileView drawing and production software. These drawing functions can be used to add shapes like a line, circle square or text labels to the design. This way, these two drawing methods complement each other: the ease of drawing by hand with a pen, and the accuracy of a digital design.
After that, the designs can be produced as a tactile diagram by printing them with a Braille printer or on swell paper. The digital design can be saved, sent as a digital file, or later be printed again as tactile diagram.

A diagram designed and printed with the TactileView drawing and production software consists of tactile lines, shapes and text in Braille. A special function of the software enables the designer to add sound information to any part in the diagram. Dots, lines, squares and all other shapes can thus be given extra information with speech or sound. This way, a tactile diagram becomes an audio-tactile diagram.
The TactileView ClickPad is specially designed for exploring an audio-tactile diagram. The ClickPad is a clipboard with elastic paper clamps that holds a tactile diagram, as well as a place to attach the receiver for the digital pen. Combined with the TactileView digital pen and the TactileView software, the ClickPad functions just like a touch screen. The TactiPad can be used this way as well when combined with the digital pen and software.
The diagram is explored by hand/with your fingers as usual, but by clicking in different places of the design with the pen, the audio information added to the design is played. Colours added to the diagram can be read out as well. The digital pen functions as a pointing device, and transmits to the computer on which position has been clicked with the pen.

The TactileView digital pen consists of three parts: a digital pen, a receiver and a holder for the receiver.
When drawing or clicking, the tip of the pen gets slightly pushed in. This activates a miniscule transmitter, which is powered by two small batteries in the pen. The receiver receives the pen’s signal and is connected to the computer with a USB cable. The receiver projects an invisible, electronic grid on the drawing surface of the TactiPad or ClickPad, by which the drawing surface is digitally defined.
The movements of the pen are processed by the TactileView drawing and production software. The software calculates the position in the design just like a computer does with a mouse.
The holder, containing the receiver is attached to the side of the TactiPad or ClickPad with magnets, creating a tactile, clearly defined drawing surface.

When the receiver is connected to the computer, the software automatically recognizes this. All the functions accessible in the software can be selected using the digital pen directly on the TactiPad or ClickPad. Keyboard operation is not required. The menus are activated with ‘long’ and ‘short’ clicks within the drawing surface.
Upon pressing ca. one second with the pen on the same location, a menu with drawing options or one of the other menu’s with properties is opened. The options can be selected with short clicks, guided by speech messages.
The digital pen alternates between a drawing pen and a clicking mouse. The software works in the design mode for the TactiPad, or in the explore mode for the ClickPad. Different sound signals indicate the status of the pen. The software is designed to work with a screen reader. 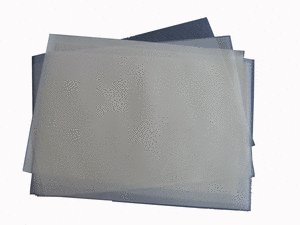